Once upon a time there was a small hill or two with some water which was cleared of all the trees surrounding it,  and a hamlet grew up.

Perhaps this hamlet was based on a Neolithic site, or there had been a hill-top fort here, or an Iron Age track had passed nearby, but the evidence is not clear and we cannot be certain that this happened.

What we do know is the Roman Watling Street passed through this area and by Anglo-Saxon times the hill-top hamlet was in existence.

There was a brook at Kilburn and the River Brent passing nearby. The Brent is one of London’s longest rivers at over 16 miles. It starts at  the junction of Dollis Brook and Mutton Brook  in Hendon and joins the Thames at Brentford. A Roman Road forded the Brent near Brentford Bridge.

Gentle Brent, I used to know you
Wandering Wembley-wards at will,
Now what change your waters show you
In the meadowlands you fill!
Recollect the elm-trees misty
And the footpaths climbing twisty
Under cedar-shaded palings,
Low laburnum-leaned-on railings
Out of Northolt on and upward to the heights of Harrow Hill.

The area of Willesden remained leafy and sylvan for hundreds of years.

The far end of Willesden High Road links to Church End and from there the Church began to acquire the land around, and by the year 1000 St Paul’s Cathedral owned a very large chunk of this part of what is now known as the Borough of Brent.

For those not familiar with this area, I am adding a map: 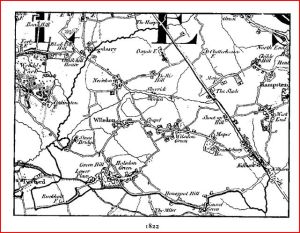 GB Historical GIS / University of Portsmouth, History of Willesden, in Brent and Middlesex | Map and description, A Vision of Britain through Time.

In 1870-72, John Marius Wilson’s Imperial Gazetteer of England and Wales described Willesden like this:

WILLESDEN, or Wilsdon, a village, a parish, and a sub-district, in Hendon district, Middlesex.

The village stands 1½ mile N by W of Willesden-Junction r. station, and 7½ WNW of St. Paul’s, London; and has a post-office‡ under London NW, a police station, and fairs on Holy Thursday and St. James’ day.

The property is much subdivided.

he living is a vicarage in the diocese of London. Value, £320.* Patrons, the Dean and Chapter of St. Paul’s. The church is later English.

The rectory of Brandesbury and two p. curacies of Kilburn are separate benefices. There are an Independent chapel, a national school, and charities £27.—The sub-district consists of W. parish and Twyford-Abbey extra-parochial tract.

But long before we see these details we begin see a few farms dotting the area around but until the 19th century the area remained fertile, furrowed and field.